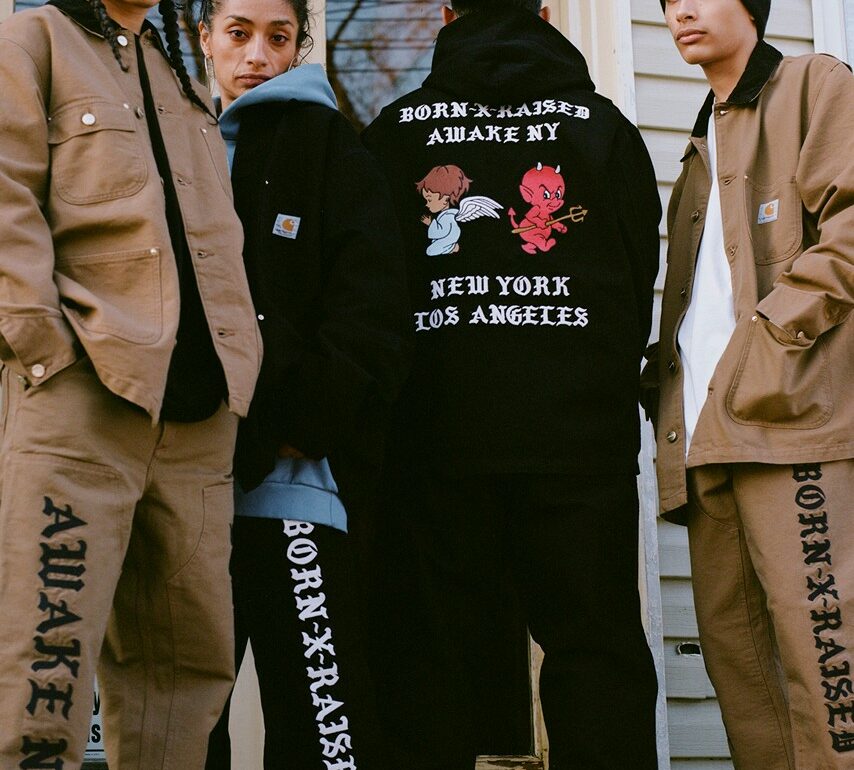 Awake NY and BornxRaised Link Up for Expansive Collection

The collection features hoodies and tees and workwear created with Carhartt WIP, with proceeds donated to charity.

Awake NY and BornxRaised have joined forces for an expansive collection inspired by New York and Los Angeles culture.

The collection consists of co-branded hoodies and t-shirts, chore coats, double knee work pants and pocket tees created in collaboration with Carhartt WIP. The offering aims to encapsulate the creative energy of each metropolis.

On the other hand, the Carhartt WIP workwear boasts embroidered graphics and provides the collection’s standout style: the familiar chore coat, presented in tan and black with intricate embellishments on its back.

“I respect the work that Spanto and 2Tone [BxR founders] do to support the local culture of Los Angeles, and we take a similar approach to New York communities through Awake NY,” says Awake NY founder Angelo Baque. “As this collection straddles both coasts, there will be two parts to [its] local give-back. 100% of the proceeds from a co-branded Carhartt WIP Pocket T will be split, donated to New York’s New Immigrant Community Empowerment (NICE) nonprofit and Los Angeles’ NELA United for Students.”

Spanto of BxR echoes Baque’s statement, saying “We created BornxRaised to bring a voice to communities that are being pushed out of Los Angeles, and are happy to see Angelo do the same for New York. By working with charities that uplift the beaten down areas where we come from, we help young people get out from under the weight of economic and societal issues beyond their control. This project will bring some funding to charities that we respect, but on a higher level, it helps us continue to assert ourselves as a voice for the neighborhoods that keep getting pushed out of the way on both coasts.”

The Awake NY x BornxRaised collection is expect to hit on the BornxRaised webstore January 15 at 12 PM PST, all proceeds from the collection will benefit the charities.