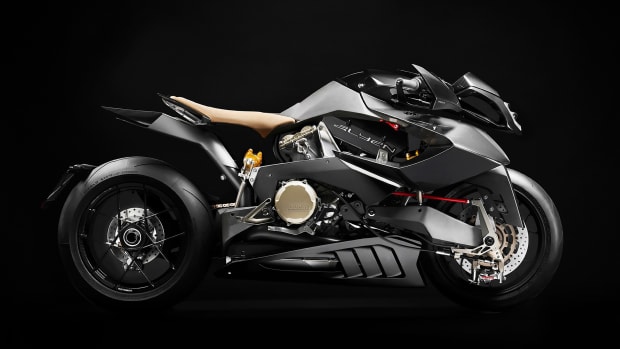 Rimini, Italy’s Vyrus motorcycle shop put one of the industry’s most powerful engines in its otherworldly Alyen concept bike.

At the core of the crazy-looking custom is the Ducati Superquadro—a 1,285cc two-cylinder that feeds 202 horsepower through a six-speed transmission with a wet clutch.

Clearly, the most startling characteristic of
the Alyen is the strange bodywork. Ultra-angled and flared matte gray panels cover nearly all parts except the power plant and the rear axle. From a head-on point of view, the fairings form a triple-tiered “V” formation capped with a golden accent courtesy of the bench.
Advertisement

“Nothing has a conventional behavior or the design proportion,” the website’s roughly translated description reads. “We approached Alyen with philosophical attitude, emphasizing art expression, as the essence of an artistic concept for a traditional use. It’s the actual idea of what the future is expecting from us.”

This New Electric Pickup Aims To Take On Tesla’s Cybertruck

No prices were released, but New Atlas reports that past Vyrus models have gone for about $90,000. Click here to learn more.